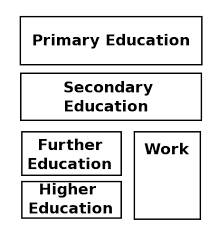 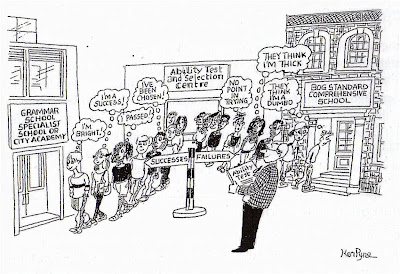 There are also significant divergences between practice in England and Wales, on the one hand, and Scotland.
In England and Wales, the government introduced a National Curriculum in 1988. This provides a framework for education between the ages of 5 - 18. All state schools are required to follow it. Independent schools are not required to follow the National Curriculum in all its details, but they must show that they provide a good all-round education and they are inspected regularly every few years.
How does National Curriculum work?
The National Curriculum is constructed in five Key Stages :
• Key Stage 1 - Foundation year and Years 1 to 2 - for pupils aged between 5 and 7 years old
• Key Stage 2 - Years 3 to 6 - for pupils aged between 8 and 11 years old
• Key Stage 3 - Years 7 to 9 - for pupils aged between 12 and 14 years old,
• Key Stage 4 - Years 10 to 11 - for pupils aged between 15 and 16 years old, and
• Key Stage 5 - Years 12 to 13 - for pupils aged between 17 and 18 years old.
In state schools each year that a pupil studies is given a number. Primary education starts in Year 1. Most pupils begin their secondary education at the age of 11 (Year 7), but in some HMC schools pupils join the school at 13+ (Year 9). At the age of 16 (the end of Key stage 4 and Year 11), all pupils take a series of exams called the General Certificate of Secondary Education (GCSE), usually in about eight to ten subjects, which must include English and Mathematics. Key Stage 5 is for pupils aged 16-18 (sometimes 19) and most schools take Advanced Level exams after a two-year course.
Almost all HMC Projects Scholars enter the first year of Key Stage 5. All pupils entering Year 12 (of the thirteen years of the National Curriculum) are beginning new courses at this point in their education.
In Scotland, pupils move to secondary education at the age of 12. At the age of 16 they take exams called Standard Grades and then move on to Highers and Advanced Highers. These are very similar to the English Advanced Subsidiary and Advanced Level courses.
How many subjects do HMC Projects scholars study?
• i) Advanced Subsidiary (AS) : At the start of the Advanced Level programme (Key Stage 5), nearly all pupils study four subjects, and they are able to gain qualifications in these subjects at the end of the year. These are known as Advanced Subsidiary Levels (AS Levels). Sometimes pupils are able to study five subjects, but this will depend on the different programme of each school. After AS Levels, pupils drop one subject and usually continue their second year of the course in three subjects to Advanced level also called A2 level. Universities use Advanced Levels as entry qualifications.
• ii) Scottish Highers : Students will take at least five subjects at Higher Level, reducing to three or four for their Advanced Higher courses.
• iii) International Baccalaureate (IB) : Increasing numbers of HMC schools are taking pupils for the International Baccalaureate, which is a parallel course to Advanced Levels and equally well used by universities for entry qualifications. The IB requires students to take courses in six subjects, three at higher level and three at lower level. Students are also required to take a course in the theory of knowledge, to write a long essay and to undertake some community service. This course is very similar to the Baccalaureate courses which are commonly studied in Europe.
How is the daily timetable organised?
Each school organises its timetable differently. Lessons might last 35, 40, 45, 55 or 60 minutes! For each subject, a student will attend classes for about 5 hours a week, and is also expected to undertake at least 6 hours private study. Students will usually also attend classes in General Studies, or Philosophy, or other similar subjects. There will also be time given to Physical Education or Sport, whether or not these are taken as subjects for studying. In England and Wales and in some Scottish schools the two years of Advanced Level, or International Baccalaureate study are often called " Sixth Form ", but - once again - each school is different!
What activities are organised outside lessons?
Along with sport, schools offer a substantial programme of " extra-curricular activities " ; that is, activities which are able to offer students a wide range of experiences, intellectual, cultural and relaxing. Music, drama, science and literary societies are offered in all schools, and there will be opportunities for outdoor education and other leisure activities. Visits to theatres and concerts, to places relevant to the courses of study (such as art galleries and museums, religious centres or historical sites, scientific companies and projects) are all part of life in a school Sixth Form.
Will the qualifications obtained in the UK be recognised back in my own country?
You will need to check with your own country's education authorities, and your country's universities to find out if they recognise and give credit for UK qualifications. Many do, but you need to ask about this in your own country.
Can I study for my own National examinations during my year in the UK?
Again, you must check with your own country's rules about this. Some countries involved in the HMC Scheme require their National Examinations to be taken in the homeland, but others are prepared to let students take the exams in the UK under proper supervision. You can certainly study for your home country's exams while you are in the UK, but you need to think carefully about how much extra work that will involve.