By Unknown October 28, 2015
PARTNERSHIP WITH COLUMBIA 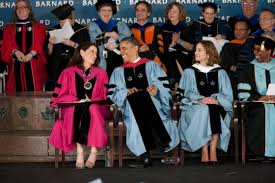 Barnard's partnership with Columbia means that the curricular offerings of one of the
country's top research universities are available for the asking; courses in all departments are available for cross registration. About equal numbers of Barnard and Columbia students do this,indicating a true academic party between the two schools.Some celebrated professors have become major attractions; for example, Barnard's Richard Pious and Dennis Dalton are quite sought after,both as noted scholars in their fields (the American presidency courses.Barnard students especially join their Columbia counterparts in courses taught by luminaries such as Robert Thurman in religion.While some departments are particularly focused on one campus or the other (theater at Barnard ,for example,or computer science at Columbia), the offerings by popular departments such as English, history and political science amount to nearly twice the number of courses as would be available otherwise, In every case, academic advisors can help students make informed choices about their course selection.