What University Life is like on a 'Forgotten' Campus 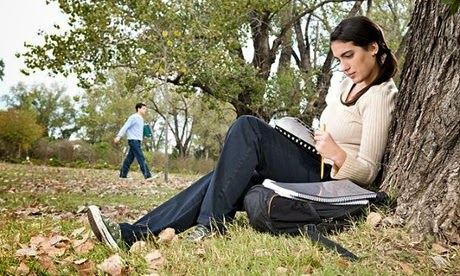 As well as their main sites, many universities also encompass one or more secondary campuses, usually in a much smaller town. Students based at them study and live miles from their main university campus.

I am one of those students living based on a “forgotten” campus.

I applied to my university two years ago based on how well it performed in subject based league tables. The University of Kent was topping the charts in journalism and I don’t regret choosing to study here. But outside of my degree there is little to do as a student at the campus where I study.

The University of Kent say: “Our Medway campus is an integral part of the university and the facilities and initiatives offered to students there are comparable with those offered at the main campus. Integration between students on both campuses is encouraged and facilitated.”

However I find the choice of societies sparse, the nightlife mediocre and that we often have to battle for funding – such as when our only campus shop was threatened with closure.

But my university experience – or lack of – has been relatively positive when compared to other students based on secondary campuses.

Sophie Tumber, 21, had been studying for two years at the Canterbury Christ Church Folkestone campus when it was announced that it wasn’t considered financially sustainable and would be closed.

The final-year performing arts student had to relocate just months later to the main campus in Canterbury, Kent, for her final year.

She estimates that the process of cancelling tenancy agreements and deposits over the last two years has resulted in her forking out £3,000.

Tumber says: “Like many others, I found it extremely stressful. We didn’t get a say or any financial help in moving to a completely different area.

“We only got one tour of the new campus and even then, it wasn’t completed.

“Now we have to share a huge campus with thousands of other students and limited facilities, whereas in Folkestone we had a whole building and theatre to ourselves.

“I was told one night from a student on the main campus that we were the ‘forgotten campus’.”

For others, the choice to leave their campus was difficult, but one they made themselves.

Katie Riddoch, 21, felt as though she had to move from the Cornwall campus of the University of Exeter in order to achieve the best possible career prospects.

During her year-long time at the university she felt “disconnected” from the main campus and decided to reapply and study neuropsychology at the University of Bangor in Wales instead.

Riddoch says: “We had to abide by their rules and regulations yet had to fight so hard for any funding from them. It is so hard to get a job nowadays so I chose to go for a well established, well funded, main campus.”

However, life on a secondary campus isn’t always all doom and gloom.

Clarissa Place, 21, graduated from the University of Kent last year, where she was based on a secondary campus in Medway. During her final year she ran for a role at the student union, which while “tricky”, resulted in the campus being better recognised by students in Canterbury.

Competing with another student from the secondary campus for the same position meant the vote was split between them. However, Medway saw a record number of students voting.

Clarissa said: “I personally feel that I had a very enriching experience with a smaller and more varied group of students.

“I felt very comfortable around campus and was very aware of the services and extra curricular activities I could partake in if I wanted to.”

Like Clarissa, I wouldn’t change my decision to study here as the smaller class sizes mean I have got value for my money and I feel part of a community.

So if you’re thinking of applying to a secondary campus, don’t write it off completely – just be aware that it may not provide the full university experience that you were hoping for.