More UK Students Choosing Universities in the US 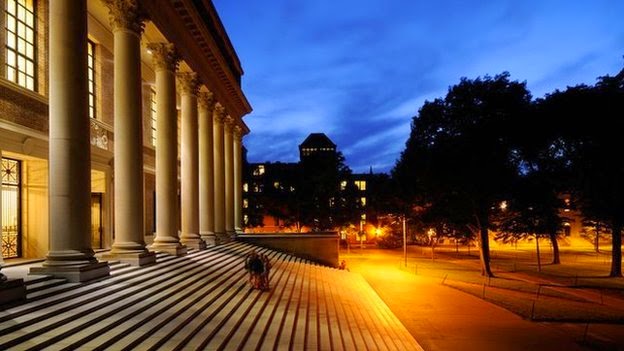 A rising number of students from the UK are choosing to go to US universities.
More than 10,000 students from the UK were at US universities in 2013-14, up by 8% on the previous year, according to annual figures from the Institute of International Education.
These students applied in the autumn of 2012, as tuition fees of £9,000 were introduced in England.
The analysis of overseas students in the US says the UK students were worth $338m (£216m) to the US economy.
But the UK remains a small proportion of the record number of 886,000 international students in the US.
Global students
The overall figures show the growing number of Chinese students in the US higher education system - rising by 17% to more than 274,000.
The figures, gathered by the Institute of International Education and the US State Department's Bureau of Educational and Cultural Affairs, show that three Asian countries - China, India and South Korea - account for about a half of all the international students in the US.
There has also been a big increase in students from Saudi Arabia and Iran.
But the biggest group of European students in US universities are now from the UK - the 13th biggest national group and overtaking the number of students from Germany.
There are now 10,191 UK students in the US, rising for the sixth successive year.
The most popular universities for these students are:
Many of the leading US universities cost more than $50,000 (£32,000) per year, much more than students would pay in the UK - although scholarships and financial support might be available.
But there are many more US students heading towards the UK - with the most recent figures showing more than 36,000 in UK universities.
The UK government has been encouraging more students to consider studying abroad. Last week a project was launched to get 25,000 UK students to study in India.
Universities in the US and from European countries such as the Netherlands have been holding recruiting events in the UK.
"As the globe shrinks it is wonderful to see young British students taking advantage of the opportunities to study abroad," said Penny Egan, executive director of the US-UK Fulbright Commission, which promotes educational exchanges between the two countries.
"Outward mobility is high on the agenda and where better to head to than some of the best universities in the world?"