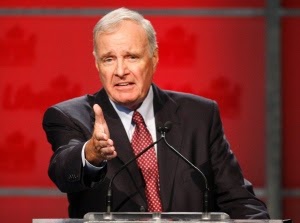 Former Prime Minister Paul Martin says he is "very angry" and other Canadians should be too about the federal government's refusal to talk to First Nations about education except on its own terms.
"Take a look at all the statements of Minister [Bernard] Valcourt of Minister [John] Duncan before him. It's 'our way or the highway.' Well I can understand why the First Nations got their backs up," he said in an interview with host Evan Solomon on CBC Radio's The House.
Former prime minister Paul Martin says he's angry the First Nations education bill has failed, and he doesn't blame the First Nations chiefs for backing out. (Adrian Wyld/Canadian Press)
On Tuesday, First Nations chiefs voted to reject Bill C-33, the First Nations control of first nations education act. Of the chiefs, 121 voted in favour, none were opposed, and 60 abstained. They also agreed to demand the government withdraw the bill.
On Friday, Aboriginal Affairs Minister Valcourt, who thought he'd secured a tacit agreement on the bill with the Assembly of First Nations, said the government would not be proceeding with the proposed legislation without its support.
In the interview airing Saturday, Martin told Solomon the costs of not fixing aboriginal education are "huge."
"This is the youngest, this is the fastest growing segment of our population. In parts of Canada they're coming close to being the majority ... And we're an aging population," Martin said.
Listen to Paul Martin on CBC Radio's The House Saturday at 9 a.m. ET

Bill C-33 would have released $500,000 right away for school infrastructure on reserves, and promised $1.4 billion to close the funding gap between aboriginal schools and public schools, with a 4.5 per cent accelerator on overall funding each year.
When the AFN turned thumbs down on the bill this week, it also voted that the $1.4 billion be handed over immediately.
"The federal government is going to withhold the money, they're going to withhold the money from kids whose future lies ahead of them," Martin said.
He also pointed out the bulk of the money wouldn't have materialized until some time in 2016, although he pegged the delay at three years.
"Do you know what that three years is? If you go into Grade 1 that's the three years that if you learn to read and write by Grade 3 then you will have a successful grade school and high school career, and if you don't, then you'll more than likely end up dropping out of Grade 10," he said.

When Martin was prime minister, his government spent a year and a half negotiating the Kelowna Accord with five national aboriginal organizations. The education portion of the $5-billion agreement was meant to ensure the high school graduation rate of aboriginal Canadians caught up with the rest of the population.

About 35 per cent of aboriginal students finish high school compared to 78 per cent for all other students in Canada. It's estimated about 70 per cent of better jobs — "knowledge jobs" — require some university or college education.
But when Stephen Harper's Conservatives defeated Martin's Liberals in 2006, the Kelowna Accord was killed.
Asked by Solomon how the government could negotiate with the 600 nations the AFN represents if they don't agree with one another, Martin said, "No one ever said they had to negotiate with 600 nations.
"There are different approaches if you're living on the British Columbia coast versus northern Ontario, or if you're a plains Cree versus the Cree in northern Quebec."
It is not a different reality, he said, than dealing with provinces that have different education systems.
So rancorous was the atmosphere surrounding the First Nations education bill, Shawn Atleo resigned as national chief of the AFN at the beginning of May due to the perception among dissenting chiefs that he supported the government's bill.
"Shawn Atleo never accepted federal control over First Nations education," Martin told Solomon.
Bill C-33 would have seen the government create and enforce standards, and allowed it to take control of failing schools.


Martin's put his own money into cause

Since he left politics, Martin has eschewed the standard ex-prime minster's route of joining a law office and engaging in a kind of lobbying, trading on status and connections.

Martin, a wealthy man before he became a politician, put his own money into the Martin Aboriginal Education Initiative, founding it as a registered charity in 2008. The organization is dedicated to helping aboriginal students finish high school and continue in post-secondary education.
He also started the Martin Aboriginal Initiative, in partnership with the Canadian Institute of Chartered Accountants, to teach financial literacy in First Nation communities.